Its a new semester at WCU and new beginnings for the WCU Cycling club. Beginning spring 2015 we’ve changed our “office” around some. Nicholas Lacombe, the president of the cycling team for the last two years, has handed his duties over to a new group of guys. Taylor Pecheukonis and Zachary Henderson have assumed the responsibilities as president and vice-president while Andrew Nicholson will remain as “other” on the club organization list. Nick, just like all the other previous club leaders, has done a great job building and representing the club during his tenure. The club certainly wouldn’t be where its at today without each’s effort and we thank all of you!

But we ride bikes so that’s what we’re going to talk about. Taylor and Smoky Mountain Bicycles have done a great job landing the club a new sponsor. We will now be representing Industry Nine for the next couple seasons! Maybe some purple and gold spokes would look good with the WCU kit? Just a thought.

Last Saturday, January 24, most of the team made the trip to the Icycle Mountain Bike event in Fontana Village, NC. At least some portion of the team has raced this event for the last four years in a row. It is always cold and a good way to begin the new year’s race season. As the cross country races started, the ground was still white from the snow the night before. Nick raced the XC sport class and ended up finishing first place. He even took a couple detours during the race! Taylor and Patrick Field raced XC beginner and placed third and tenth respectively. It was Patrick’s first bike race ever and he came fully prepared for the 90’s theme. After the XC races Pam and Dave Forshee of Smoky Mountain Bicycles fed us a delicious grilled lunch from their cabin before we went back out for downhill practice. By the time the night downhill races began the snow had mostly melted. This allowed the course to mush up during practice and then freeze back over before the racing began. Seth Parker raced the DH sport class while Eric Magyar raced DH beginner and placed sixth and twentieth. 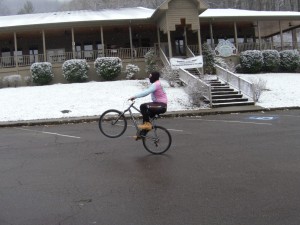 On Saturday, January 31, Andrew Nicholson raced the Taco Stand Classic in Lawrenceville, GA. The event offered solo and team- 3 or 6 hour races on an 8 mile singletrack course. Andrew placed 13th in the Expert 6 hour class with 6 laps in 5:12:50 while club alum, Nick Bragg finished third with 7 laps in 5:20:57. With temperatures in the 50’s the weather and course conditions were favorable for a 6 hour race.

Spencer Middleton and Andrew Nicholson plan on beginning preparation for the spring collegiate road schedule at the Spring Training Series in Greenville, South Carolina over the next month. The series runs from February 7 through March 1 with races every Saturday and Sunday. This schedule has some overlap with the SECCC Collegiate schedule, but it is unlikely we’ll travel to University of Florida or Lindsey Wilson. We are stoked for these upcoming schedules.

Punxsutawney Phil may have predicted another 6 weeks of winter but we plan on riding and racing anyway!

As there were no collegiate races on the weekend of September 27-28, most of the team found their own adventures to jump into. Of course they still involved riding bikes though. Matt, Seth, and Taylor headed to West Virginia to race in the 2nd Annual Freefall Festival at Snowshoe. Results are posted here. Nick, Stephan, and Bradley woke up early Saturday morning to volunteer for the Valley of the Lilies run on Western Carolina University’s campus. They got to ride their bikes in front of and behind the runners. Sort of like the lead-moto for bike races. Sounds like fun. After the run the volunteers traveled west to Franklin, NC to join Robert and Tierra in running the aid stations for the Tour de Franklin held by Smoky Mountain Bicycles. Andrew rode the 64-mile route of the Tour de Franklin and was pleasantly surprised to see his teammates at the aid stations. But that’s not it for the volunteer crew. After aiding with the Tour de Franklin, they headed to the Pisgah Ranger District to camp Saturday night and ride the trails WNC is notorious for on Sunday. While all these guys and girl were doing all this, Spencer had traveled to Dahlonega, Georgia to race in the Six Gap criterium on Saturday and century on Sunday. Spencer finished the century in 5 hours and 42 minutes. Impressive!

Now we’ve got two more collegiate conference races for this season. We will be headed to Atlanta, Georgia to race at the Georgia International Horse Park this weekend, October 4-5. This is where the mountain biking events in the 1996 Olympics were held! The following weekend, October 11-12, will be the conference championships at Lees-McRae College. There will be double points for the series and then a season ending award ceremony afterwords. Finally, Collegiate MTB Nationals will be at Beech Mountain Ski Resort on October 24-26! Go Catamounts! 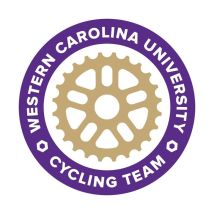 Saturday morning started out cool and sunny, but the weekend didn’t end that way. It started raining after the downhill race and hardly eased up for the rest of the weekend. Catamounts must do alright in the rain, because the team ended up getting two first places among other solid results! Bradley Chapman grabbed the top spot in men’s downhill C before Andrew Nicholson won the men’s B short track race. Matt Fitzgerald rode to 4th place in a stacked A downhill lineup and then 2nd in short track C. Seth Parker got some points placing 20th in downhill A and 7th in short track C. Also, Taylor Pechuekonis placed 6th in downhill C.

Bradley said this was his first ever downhill race. Never would’ve guessed!

After downhill and short track, dual slalom was on the schedule. Disappointingly, the dual slalom was cancelled due to the rain. Every rider had planned on racing it, but the course was soaking wet. The team decided to head back to Cullowhee to clean up and relax.

Andrew Nicholson made the trip back down for the cross country race Sunday at Issaqueena Forest and placed 7th in the B class.

Despite the rain, the whole team rode great and is looking forward to the rest of the races this fall! Check out our new logo below, that will be featured on future jersey designs!

The Western Carolina University Cycling Team won the Distinguished Club Sport Award of the Year on April 21, thanks to the growth and forward direction of this year’s team members. Hosting our inaugural road bike race was a big step forward for our team and an event that we would like to host again next year. The supplemental revenue the team accrued this year will propel the team to new heights this Fall during mountain bike season. It would be great to see at least one or two WCU riders compete in Collegiate Mountain Bike Nationals next year and to vie for a place on the podium on the conference omnium.

On Wednesday, the 23rd, a couple of WCU Cycling Team members will be racing in the Ring of Fire crit series in Asheville and this weekend we will participate in Issaquena’s Last Ride in Walhalla, SC. The team will be out in full force this Sunday helping out with the Cullowhee Bicycle Rodeo. 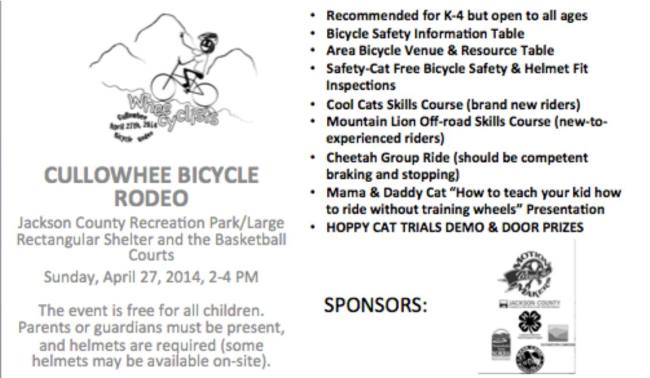 Weekend of April 12-13: Volunteering and Racing

The WCU Cycling Team had a busy and productive time this weekend in Georgia. On Saturday, the team departed at 4 a.m. from Western Carolina to volunteer all day at the Warrior Dash in Mountain City, Georgia. We had 15 members and friends out working hard to bring home a big payday to supplement the team budget next year. Collegiate mountain bike season is the focus of the team and we intend to make our biggest presence in history next semester!

The WCU Cycling Team came out in full force to volunteer at the Warrior Dash race in Mountain City on Saturday. 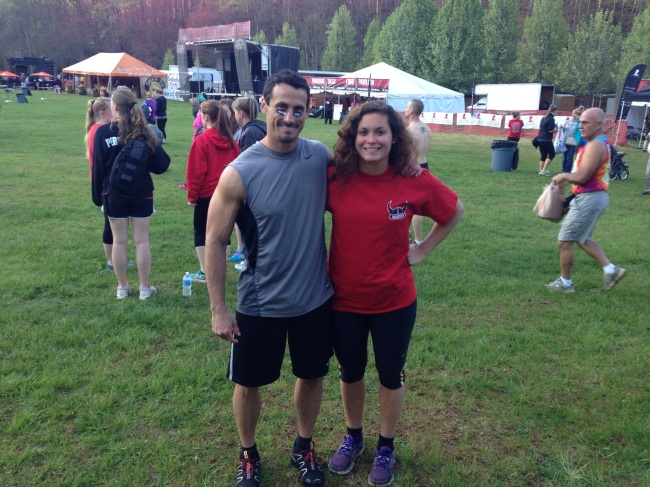 On Sunday, two WCU Cycling Team members headed down to Clayton, Georgia for a very hilly Tour of Georgia Gran Fondo. The race featured 12,000 feet of climbing and 108 miles with 4 timed sections- the final section being the infamous Hogpen Gap as featured in the immensely popular Six Gap century ride. Thanks Smoky Mountain Bicycles for the free entries for the team!

Troy Adams finished in 5th place overall, behind  Reid Beloni of Greenlife-Suburu Cycling Team. Troy decided to ride the last 50 miles solo as he was tired of going slow (only the timed sections affected the standings). Andrew Nicholson placed 10th overall, after volunteering all day Saturday! This was Andrew’s longest ride to date and on an extremely arduous route.

On Wednesday, a few members of the team are headed to Carrier Park in Asheville to race in the Ring of Fire crit series. The WCU Cycling Team has two more century rides on the calendar- Issaquena’s Last Ride and the Tour de Cashiers to finish up the semester. The very qualified Nick Lacombe intends to work as a bike mechanic at Smoky Mountain Bicycles this summer in addition to racing nearly every weekend wearing the Smoky Mountain Bicycles jersey. Best of luck to him and the rest of the team, as we will continue to ride hard all summer and come into mountain bike season as strong as ever!

The WCU Rowdy Mountain Bike Crew were out at Saturday’s race offering excellent support for the team, before they went and shredded at ETSU’s excellent mountain bike trails.

Not only did the WCU Cycling Team get some solid results at Milligan’s road race weekend, 2 additional members podiumed at the Tsali Knobscorcher mountain bike race today! Congratulations Robert Bianculli for 2nd in the beginner class and winner of a post-race push-up competition and Stephan Mchugh for 3rd in sport and a shoutout to Nick Lacombe finishing 4th with a broken spoke in sport class and Troy Adams finishing 10th in a stacked pro field, great to see so many Catamounts riding strong!

The fastest ever recorded time for our TT is 5:41. Will the SECCC conquer this blistering fast time? We will see this weekend!

Awards will be given to fastest overall Men’s and Women’s riders (KOM & QOM) plus medals for every event! Lots of prizes to give away!

Check out our sponsors!